My yoga journey continued sporadically. If the opportunity arose to attend a free session arose, I went to a class. Other times I tried one of the various televised yoga routines. Long periods would pass between these times and that kept it interesting when I did do some. That continued until this year when my health curtailed all physical activity. As I started back to work I wondered if I should try one of the very gentle short yoga programmes I’d recorded off the television. I’d do one I’d done before that I knew was aimed at beginners and so easy that I’d felt it a waste of my time last time I did it.

I couldn’t do it. It starts with cat pose, which I’d never felt any benefit from before, but this time was challenging and full of interest. Then it goes to downward dog, and I couldn’t stay in the position for more than a second or two without feeling dreadful and stopping. I didn’t just need to stop doing the posture, but had to stop the whole session. A few weeks later I tried again. This time downward dog was possible, although I didn’t hold the position for more than a breath or two but came out of it and rested until the instructor moved onto the next thing. I managed the next few postures fine until the inhale up to warrior 2. I smiled in anticipation of my old favourite but my face fell when I realised I couldn’t do it. Damn it!

To feel well tomorrow I need to do almost nothing today. But to feel well next week and next month surely I need to get my body doing things again. While I was at home I sat and lay and barely used my arms. On my first weeks back at work in the library handling books, even singly, was challenging. I had no grip strength. Circling one wrist with the other hand I can feel the change of shape where the muscles atrophied. With the return to commuting I thought the clutch in my car might be faulty because it was so heavy, likewise the power steering, but I came to realise I just don’t have the muscle strength I never even realised I was using when I drove my car.

It’s true that getting back to the daily grind will rebuild the muscle I need to get through the day, but I feel like I have a blank, if feeble, slate to rebuild my muscles evenly and in balance with yoga. But I think it will be a very slow process.

I have been surprised to find how riding is easier for me than handling books or beginner level yoga. The only things I can think to make this make sense are as follows:

Getting back to my yoga theme: coming from this position of humble feebleness, for the first time I have finally understood the importance of correct form and the unimportance of range. I am more in tune with my body, having been forced to learn to listen to it. Because everything is weak, I don’t find strong muscles trying to cover up for weaker ones, and I feel that what is working or stretching matches what the instructor says I should feel.

I have to say this is aided by good instructors. I accept that I was not the most receptive student in those early classes at the gym, but I’m astounded at how good a televised instructor is at preventing errors of form compared to one who could see me, and let me believe I was doing postures correctly when I now see I was often letting limbs or joints point in incorrect positions which diluted the benefits of the positions. I would have thought a television or DVD instructor could never compare to having an instructor who could see you, but I was so wrong, as I was about so many things about yoga.

Now for the first time I come to my yoga practice with respect for yoga and for my body. Now I struggle with the easiest postures but I am more of a yogi than I ever was when it seemed easier. 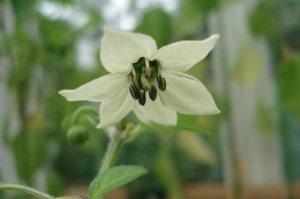 When I was younger I could never see the point of yoga. In my teens and early twenties my childhood gymnastics were still close enough that flexibility came without a thought. Also yoga looked dull and slow. It lacked any appeal.

During my late twenties I was the avid holder of a gym-embership. (That was a typo. It was a membership, but I burned for it and carried my gym fitness smouldering within me, so let the typo stand.) l rowed ferociously, pedaled unstoppably and lifted weights in serious quantities. I was aware I could go to the classes that were held there for no extra cost,  but why would I do that? Stand in a sweaty herd and do a rank and file workout? Surely that was for the weak-willed and weak bodied?

A day came when I was lying on the gym mats, feeling uncharacteristically under motivated and chatting with any other regulars who were available. A girl I vaguely knew got talking to me for a bit and convinced me to go with her to the yoga class about to start. I don’t remember exactly but I think my attending meant there were enough people that the class would run, so I was doing everyone a favour by being the fourth person. Also the minute size of the class made it more welcoming to me, so why not?

Aside from my inability to stand on one leg, the session presented little in the way of physical challenges for me. I was aware of parts of my brain frantically wishing that we’d do something … something … more. I was mentally uncomfortable with the softness of it. I missed the reassuring heft of my free weights and the struggle and triumph of competitive cardio. I secretly despised the instructor, with her … was it her artificially gentle voice? Her insistence that everything was lovely? Her … her … her everything. Why wasn’t it over yet?

She had us lie on our backs and we did a guided relaxation. Which I fought with every fibre of my being. And at some point around when I refused to relax my jaw I realised I was crying and had been for some time. The session finished and I was still crying. I walked home and arrived still crying. Mr S, not yet my husband, was astonished. “What happened?” he cried. The only teary explanation I could come up with was, “l did yoga and then I was sad! Sob sob, sob!”

Eventually I must have stopped crying. In the days following that various people told me this is not that unusual a reaction to yoga. I gained a wary respect for its unexpected power over me. I also decided I needed to practice relaxation at home before trying it public again. After taking advice from friends I acquired some relaxation CDs and embarked upon them regularly.

From time to time I went back to the class. I still despised the instructor but yoga now interested me because it clearly had strange powers that I didn’t understand. I still rebelled in relaxation sessions, but differently than before. Now I tried to relax and only refused when doing the sessions where you have to clench each muscle before you relax it. Those I still refuse to do because I have a massive ability to instantly tense any muscle group to its limit but no corresponding ability to relax it again afterwards. If I try one of those “relaxations” I end up painfully tense in every muscle I own.

As the postures became familiar I found favourites among them. I loved the warrior poses in particular. Other ones, like cat pose, still seemed completely pointless.

I learned during this time that there is a difference between relaxation and exhaustion. Until then I’d only relaxed mentally when I was exhausted and thought the physical feeling after working out to exhaustion meant I was physically relaxed. I didn’t actually learn how to relax with another human being present until I started riding lessons at the age of 29, but that’s another story. And I was taking steps in the right direction.

In time I came to the point where the gym wasn’t as important to me as it had been. In the run up to my wedding I was keen not to change shape. This was in part because my ex-display last-one-of-that-design wedding dress was a few sizes too big and I didn’t want to lose any more weight on the waist and make it impossible for the alterations seamstress to do her work and also because of the cut of the straps which wouldn’t accommodate that much extra muscle around the chest/shoulder area. This took the fun out of gym time and eventually I cancelled the membership. It would be a shame to end my intermittent attendance at yoga classes but I could get a DVD to do at home or something.

Continued in Part 2, The unexpected journey to enlightened(ish) practice